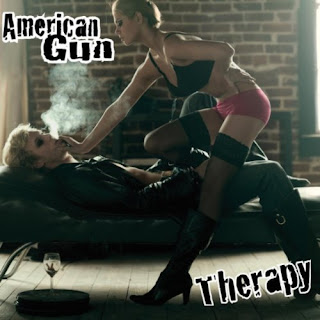 The album cover above is one of the best ones I've seen in a while. As album covers go, it ranks up there with others I like a lot: Nevermind by Nirvana and 1984 by Van Halen.

And hey, American Gun puts out some fine rock-n-roll music as I discovered after reading one fellow's opinion about the top albums from the spring of this year over on Twangville. American Gun's Therapy made the list, I did a little research, I downloaded the album, and sonic happiness ensued.

And by the way, Therapy is one of the choices in the poll to the right, which has enticed only three flippin' votes. Something wrong with you people? Are you commies or somethin'? Rock the vote.

Since I've featured songs from those particular albums by Amanda Shires, Fleet Foxes, Ha Ha Tonka, Hayes Carll, Jason Isbell & the 400 Unit, and Rod Picott on past Music Fridays, I figured I'd give some love to American Gun, a band out of South Carolina who has four albums in their discography.

On Last.fm, the band's music is described as "rambunctious, barn-burning rock n’ roll." I also read that they've opened for The Avett Brothers and Jason Isbell & the 400 Unit--good company to be keeping, in my opinion. I'm looking forward to purchasing the three previous albums--at only $5 a pop on the band's website, btw--since I only own Therapy at the moment.

The song featured today is "Therapy," and I chose the video below because I enjoy its black and white grittiness. You can find an official video for the song on YouTube, but I like this one better. Unfortunately, there's no video for "Lie to Me," another of my favorite songs from the album, or I'd be providing that too.

Posted by Quintilian B. Nasty at 7:43 AM

Thanks very much for the kind words. Glad you enjoy the music.

No problem. I'm working my way through the previous three releases, and I've enjoyed all of them. Great music.

Or rather, at least for you fellows, Go Cocks?