Death Cab for Cutie is a band I came into liking late. They've been around a while now. And they've kind of taken over for the place that R.E.M. holds for me, a indie-pop-rock band I enjoy listening to when I'm jonesin' for such music.

I wanted to stay up to see their performance on Letterman last night, but I feel asleep on the couch. So this is what I didn't see since I slumbered last night.

Posted by Quintilian B. Nasty at 12:38 PM No comments:

Well, it's been arranged. It's all over. Ladies, you will soon lose my beautiful sperm from the gene pool. This March I will get a vasectomy. Ladies de Kirksville, you had your chances. Mrs. Nasty got to 'em, and now they'll be officially closed out. When we wanted them to, my boys swam and gave us two beautiful children. After early March I will no longer sire children.

My phone conversation to set up the appointment was slightly humorous though. I asked the nurse, "So I just come on in and get snipped? Anything else I need to know?" She gave a polite chortle and offered some more details.

What's a bit disturbing is how my doctor's office is a regular vasectomy factory. One dude does it: Fridays at 1pm. Every week. Nothing like starting your weekend by ending your force of procreation.

I'm trying to stay positive, but recommendations of wearing tight-fitting underwear and cooling down my groin with a package of frozen corn aren't exactly prospects to look forward to.
Posted by Quintilian B. Nasty at 11:54 PM 3 comments:

I'm sad to hear about the passing of Ernie Banks.

On a more positive note, I offer "Go Cubs Go."

Posted by Quintilian B. Nasty at 11:39 PM No comments:

Posted by Quintilian B. Nasty at 11:44 AM No comments:

Today I offer a couple of songs from one of the best alternative albums of the 80s, Sonic Youth's Daydream Nation. I listened to this album a lot back in the late 80s and 90s. And heck, I'm listening to it right now. Great stuff.

Posted by Quintilian B. Nasty at 10:11 AM No comments: 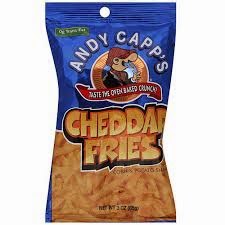 I introduced my kids to Andy Capp's Cheddar Fries. That's a damn fine snack food. Too bad the comic strip is basically about a guy who is an alcoholic. Or at least a guy who drinks too much.

I guess we might be able to say the same thing about Homer Simpson.


If you like a good documentary about mass corruption, political kickbacks, oligarchic wealth, and possible/probable conspiracy theories, I have a recommendation. And no it's not about our American "democracy." It's about Vladimir Putin. Check out PBS Frontline's Putin's Way.

ESPN's Way-Too-Early Top 25 has the Crimson Tide ranked at 10. I think that's a fair evaluation. There are important question marks at LG, RG, RT, LB, QB, and Safety.
Posted by Quintilian B. Nasty at 2:14 PM 1 comment:

Today is my birthday. I think I was in my late 20s when my attitude toward birthdays changed. People like to celebrate 'em, but when it comes down to it, it's just another day closer to death. I'll take and appreciate the presents and kind notes from friends though. I'm not that dark.

My birthday presents were a couple of new wristwatches. Over the holidays I lost my trusty brown-leather-band Peugeot watch that I've probably had for at least a decade. I've replaced a few batteries and bands over the years. I got one watch with Roman numerals that's a bit dressier, and I got another with numbers that's more casual.

I've heard people say that watches are no longer being worn as much because people look at the time via their smartphones. I think there's a bit of bunk to that notion because often people ask me what time it is because they see I have a wristwatch on.

The national championship game is tonight. Of course, I'm sore that the Crimson Tide squad is not in it. I'll be rooting for Oregon. Ohio State is a hot team though. Their big plays and the injuries Alabama players sustained in the second half did the Tide in.

The good guys got revenge in the Iron Bowl and then won the SEC Championship, so there's a bit of solace in those happenings.
Posted by Quintilian B. Nasty at 11:55 AM No comments:

Here's a tune from the latest album from The Hold Steady. In the comments of my Top Twentysomething Albums of 2014 post, Fozzie said "Wait a While" was one of his favorite songs on the album. One of my favorites is "Big Cig."

Michael T. Klare's "Carbon's Counterattack" is a worthwhile read over on TomDispatch. This ¶ stood out to me:
But this vision, like so much contemporary advertising, is based on a lie: in this case, on the increasingly bizarre idea that, in the twenty-first century, humanity can burn its way through significant parts of the planet’s reserves of fossil fuels to achieve a world in which everything is essentially the same -- there’s just more of it for everyone.  In the world portrayed by Exxon, it’s possible for a reassuring version of business-as-usual to proceed without environmental consequences.  In that world, the unimpeded and accelerated release of carbon into the atmosphere has no significant impact on people’s lives.  This is, of course, a modern fairy tale that, if believed, will have the most disastrous of results.

Regardless, here's a quotation from Rebecca Solnit: "To me, the grounds for hope are simply that we don't know what will happen next, and that the unlikely and unimaginable transpire quite regularly. And that the unofficial history of the world shows that dedicated individuals and popular movements can shape history and have, though how and when we might win and how long it takes is not predictable."

Over the holidays, the Nasty family got into watching game shows, namely Family Feud and The Price is Right. Since I primarily do the grocery shopping in the family, I enjoy The Price is Right. I remember that show being a big draw at my fraternity house. It and Supermarket Sweep.

My son, a first grader, starts his basketball season this month. It should be entertaining. I hope he's better than I was and he grows taller than I am (eventually). For whatever reason, in junior high school, I went out for the basketball team a couple of times. I stunk. So many kids went out for basketball that West Junior had three teams: A, B, and C. It's not hard to guess what team I suited up for. I should have gone into wrestling instead.

Posted by Quintilian B. Nasty at 2:15 PM No comments:

I have DirectTV, and one of the channels I've been wandering into is channel 500, the Audience channel.

This past weekend the channel was playing a strong loop of NYPD Blue episodes. Now I'm taping it as a series.

Of the cop shows out there, I have a top two: Hill Street Blues and NYPD Blue. I'm throwing out The Wire, which was outstanding, because it's a HBO show. The other two are non-cable channel offerings, a different category in my mind.

I picked up watching NYPD Blue when Sipowicz's partner was Bobby Simone played by Jimmy Smits. I think I only caught a couple of episodes of the first two seasons when David Caruso played John Kelly.

Right now the channel is in the part of the series where the main characters are Sipowicz, Simone, Russell (who just turned down Simone on a marriage offer), Martinez, and Fancy.

I look forward to watching more episodes as the weeks and months churn along.
Posted by Quintilian B. Nasty at 10:02 PM No comments:

I wonder if it's a sign of middle age if you're eating a lot of grapefruit? My daughter sold fruit for a chorus fundraiser, and we got a box of mixed fruit. I hadn't had grapefruit in years, and today I just finished the last one of the box. I remember my parents eating a ton of grapefruit when I was kid, and during those years, my parents were in their late forties and fifties. At least grapefruit is extremely healthy.

And it seems like that occasional glass of low-fat buttermilk I drink has some solid health benefits.

This article from my local paper ~ "New Frontier of Local Food Movement is Here" ~ offers some hope for central Illinois farmers. Once this deal gets up and running, I want to get my hands on some locally sourced bread. That would be good eats.

I started reading Men Explain Things to Me by Rebecca Solnit. I'm enjoying it quite a bit but am a bit puzzled why I haven't read any of her other books. I've liked her columns in Harper's, but I wasn't aware of her other work. Now I'm eyeing Wanderlust: A History of Walking and The Encyclopedia of Trouble and Spaciousness.
Posted by Quintilian B. Nasty at 3:15 PM No comments:

My Hall of Fame Ballot

I recently watched MLB Network's Roundtable program about the next Hall of Famers to enter Cooperstown.

If I had a ballot, here are the guys who would be on it:

In addition to the Crimson Tide playing like crap last night, after Mrs. Nasty took a shower Wednesday morning, the sinks started gurgling, and the toilets and shower were gurgling up crapwater. After calling a plumber and them spending hours snaking the line, they determined that the sewer pipe had collapsed right outside the foundation.

So we've spent the past couple of nights at a hotel. Today, thankfully, the same company had guys bring out a backhoe, dig up our backyard, and put in a new pipe. On a more positive note, it's now fixed, and we can run water again.

But this song still sums up my attitude right now.

Posted by Quintilian B. Nasty at 2:49 PM No comments:

What a crappy way to end what was overall a very good season for the Crimson Tide.

Last night Alabama's nasty penchant to get burnt on big plays did them in even though the Tide made it interesting to the very end. The offense was either inducing three-and-outs or marching down the field on solid drives. They needed to do more of the latter.

What was disturbing was that the defense gave up a ton of yardage in the running game. And once Lee and Ragland were no longer in the game, the Tide had two good but really inexperienced players ~ Shaun Dion Hamilton (true freshman) and Rueben Foster ~ starting at linebacker on the first team defense. That was clearly evident on the huge 85-year touchdown run late in the game.

It was great to be in the first ever playoff for D1 football, but Alabama was just out of sorts at times last night. They didn't execute like they should have and maddeningly gave up all kinds of third-and-long conversions.

Alabama will lose many key players after this year, so it's difficult to know what to expect in 2015 in the ultra competitive SEC West.

Here are the players who will graduate or will likely enter the draft:

The Crimson Tide will have to replace 3/5 of its starting offensive line and will lose one of the best receivers in Alabama history (among the likes of Don Hutson, Ozzie Newsome, and Julio Jones).

Regardless, what a depressing way to end the season.
Posted by Quintilian B. Nasty at 2:35 PM No comments: